Have you seen One Day On Earth?  On October 10, 2010, people from all over the world shot video and have been in the process of uploading those videos ever since.   Click on the archive, and see a map of the world with links to tons of snapshot videos of all kinds of things.  From the South Pole to Australia to Washington State, people are going about their lives, and with One Day on Earth, you can have a glimpse of all that’s going on on a typical day.   If you have video of your own life from that day, upload it and be a part of the project.  A feature film is due out that looks to be pretty amazing The next “one day on Earth” happens on 11.11.2011.

The video above is from Global Tribe, a missions organization.  I came across the video at Creative Visions Foundation, an organization supporting creative activisits who are using media to “inform, inspire, and empower.”   As I watched the piece, the sense of the growing connectivity around the planet became palpable.  The impression is that everywhere you turn these days, people are reaching out to people, all around the world.  And yes, there are wars and atrocities and Congresses who can’t get their act together, but still, you can’t help but be excited about the good things people are up to these days. 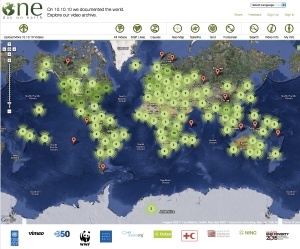 My primary reaction is one of awe and amazement.   “Vast” is a word that comes to mind constantly, as does “limitations” and “finite.”   The tension between vast and limitations is simple that of the frame.   The greatest works of art that carry us into universal meaning all travel through some framing device that both limits and frees, and it’s only through local culture and particular acts that the human connection is made.   As frustrating as some days can be, the experience of being human in this time has possibilities that we have only just begun to touch.

Worship is the first response…then, creation…