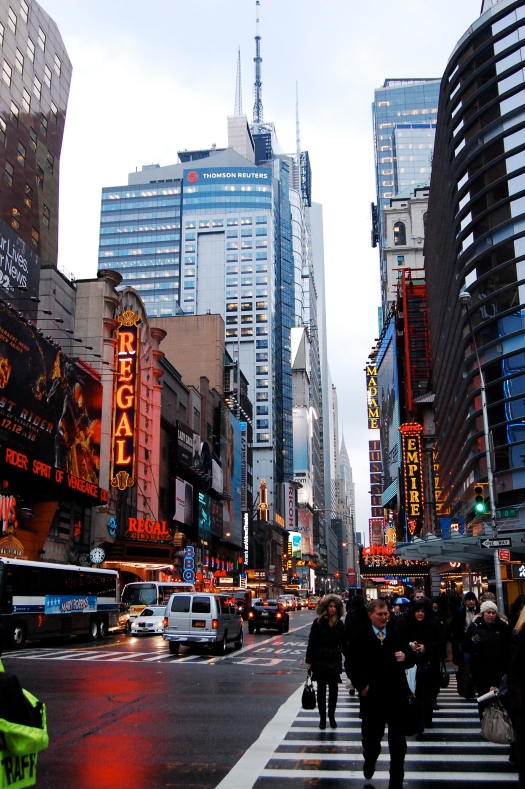 The truth is, New York gets a bit less daunting with every visit.  Watching my daughter Amy navigate the juggernaut that is NYC inspires me and humbles me, and at the same time makes the whole NY life seem much more doable, if not completely attractive.  I don’t have any great desire to live in New York…Seattle is fabulous, and we’re loving it here.  But when both your kids are living there and they’re constantly doing performances that you’d like to see…well, we’ll just have to see what the future holds.

The Cloisters, the Brooklyn Bridge, the 9-11 Memorial, great French food compliments of Marsailles in Midtown (Amy works there as a server), two Broadway plays (one starring Alan Rickman), two off-Broadway plays (one by Teresa Rebeck), the Whitney Museum (big disappointment because of all the floors closed), tons of walking, and some great time with my daughter.   The 75¢ coffee was a treat (because of price, not taste), and the constant barrage of languages was pretty wonderful.

Lots of energy on those streets, and lots of downcast eyes; I suppose those eyes strike me as much as anything.  It’s a city of tremendous bustle and life, but that’s not the same thing as saying it’s a city of joy.  I intentionally scanned the crowd constantly to see if anyone had their eyes up and shining, as if expecting something exciting to happen, something that would bring them substantial joy and fulfillment, even if just for a moment.   I’m sure there’s tons of that kind of expectancy in NY, but I didn’t see much.  At least not on the street.   We were more likely to run into that sort of thing in coffee shops and restaurants and audiences waiting for plays, though honestly, lots of people in those places look a bit haggard as well.    It’s a tough life; exciting, and tough.  I couldn’t be more proud of Amy and the way she’s taken it on.

Churches are all over the place, beautiful structures that have no doubt mostly seen fuller days.   I caught sight of a few lone souls wandering into a few of them as I passed by.    I wanted to go in and pray on a couple of occasions, but didn’t.  On the other hand, I prayed a lot wandering the streets.  Not really praying for anything (except perhaps, for my children, seeing as how they’re going to invest so much of their lives in this city), for God to do anything, as much as just trying to sense His presence on those streets.   He’s there all right, but from the once-in-a-while visitor’s perspective, the human presence is so thick, so celebrated, and so guarded that divinity seems to slip into hiding pretty easily.

The subway’s energy captures much of the tone of not only the city, but the general state of that old stand-by, the human condition.  The cars we ride in are moving, shuttling us about, but while we’re in the car, we sit, bundled up, controlling the borders around us, guarding personal space, minimizing personal contact with those squeezed in alongside.  Each stranger is a mystery to us, full of potential goodwill and malice, and everything in-between.   And it’s completely practical to manage ourselves this way, given what we know about the world around us.

But then strangeness begins.   A limping man with a cane rides from one stop to another listlessly preaching the gospel of Jesus, though much of what he said was undecipherable, even though he was standing right in front of us.   And there were the dancers, three young men who flew through the air in tight little spaces, spinning crazy circles, break dancing, delighting some, annoying others: I was glad to hear the applause at the end.  And a woman loudly, drunkenly digging through her suitcases for something, her pants not covering her very well as she bent over digging furiously.  The few of us in the car just then shared that all too familiar embarrassment when nutty stuff happens, and no one knows what to do, each one doing the car crash curiosity dance.  Don’t look, don’t look–oh, you looked, and it’s just too strange for words.

And then, there’s the Cloisters.  A branch of the Metropolitan Museum of Art dedicated to Medieval European art that opened to the general public back in the late 30’s, the Cloisters were a high point of the trip.  Dark, quiet and beautiful, the Cloisters combined with the clear, crisp day outside to make a strong counterpoint to the speed and density of Midtown.  The monk in me will never die, I suppose, and I could have stayed in the various chapels for hours.   As it was, I got a couple of beautiful pictures of Amy in quiet space, and given that she’s taking the acting road and all the difficulty that entails, I’m going to carve out that quiet space for her, and hold her there often.

We have to carry the quiet with us…inside…