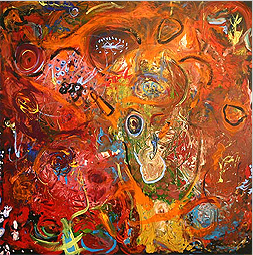 Jeffrey Overstreet’s article inspired me to go grab My Kid Could Paint That, a documentary by Amir Bar-Lev concerning one Marla Olmstead, a four-year-old painter whose work took the New York Art Scene by storm back in 2005. (Her painting “Mosquito Bite” is shown above.) The film begins as a celebration of this year child’s genius, her large abstract paintings seeming to show large ideas that belong more to the adult world. The parents seem genuinely surprised by her prowess and delighted by the sudden attention that seemed to come out of nowhere, nothing but serendipity. “Seem” is the operative word, because suspicion arises after a 60 minutes report questioning whether Marla had actually done these paintings, or at least done them alone. Bar-Lev ends up questioning the parents as well, giving voice to the doubts he too experiences. Marla’s swift rise to prominence turns almost immediately, sales of her work, which are in the thousands of dollars, plummeted. The story of this young painter and her family raises huge questions about the validity of modern art, as well as the power of marketing and journalism.

If you go to Marla’s website now, you see a beautifully done web site, and indeed, the paintings are very cool. They also have posted short videos showing Marla painting specific works, so the impression is that she is undoubtedly doing the paintings herself. It’s a fascinating story, and regardless, the paintings being created are certainly interesting and in some cases, quite beautiful. 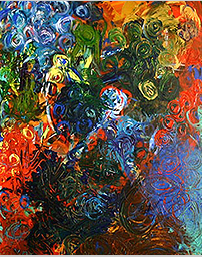 But it does raise the question “What is art?” The modernists argued that the naturalism of classic work was not the only way to go about making art. They argued for a work of art’s autonomy, and that memesis (imitation) was not germane. The finished piece of canvas and paint was not an imitation…it simply was what it was, standing on its own, an original thing in the world. When I look at certain kinds of abstract art, there are some that are quite stunning and beautiful, and some of Marla’s work strikes me that way. Perhaps my kid could paint that, but more to the point is that my kid doesn’t paint that.

Seems to me the question is this: Line, color, shape, form, composition, and the other aesthetic elements that come into play in putting paint on canvas…can beauty only be made by rational, educated processes or can they simply spill out on the page not in childish randomness, but in childish play led by a sort of uneducated intuition that bypasses the rational process all together, and that some people (who knows why, other that God gifts us all differently) throw paint on canvas in abstraction, and step back and decide whether they like it, or whether they don’t. And somehow, through this process, something visually coherent arises that touches us through inexplicable means, and the lack of rationality about it is no reason not to celebrate the art’s arrival.

In other words, maybe modern art is part sham, part wonder. While I still ascribe to the Greek’s memesis as the basis for much human understanding in terms of naturalistic art I(that which takes “nature” or the “natural world” as its beginning point), I tend to believe abstract art also has a place at the table. Whether or not any painting by any master is worth the millions collectors end up paying is another question.

Enough rambling. Fascinating story about art, family, journalism, and even the nature of faith and doubt.

5 Replies to “My Kid Could Paint That”